Home / About Us / News / REBA LIVE IN CONCERT

Terri Clark and The Isaacs

“I am very grateful we’re continuing this tour on into 2023,” Reba said. “I’ve had so much fun being back out on the road and doing what I love to do most, entertaining people. And now getting to headline places like Madison Square Garden and bring my buddies Terri Clark and The Isaacs with me? Well, that's just the extra icing on an already triple-layered, stuffed and filled, iced and frosted cake!"

Reba fans can access a special fan presale starting Tuesday, October 4 at 10 AM local time by signing up for Reba’s email list here: http://eepurl.com/bYbLIP. Fans must be signed up by 11:59 PM CT on Monday, October 3 in order to receive the presale code. The presale code will be emailed out on Tuesday morning prior to the presale.

Citi is the official presale credit card for the Reba tour. As such, Citi cardmembers will have access to purchase presale tickets beginning Tuesday, October 4 at 10am local time until Thursday, October 6 at 10pm local time through Citi Entertainment. For complete presale details visit www.citientertainment.com.

The fall leg of REBA: LIVE IN CONCERT is set to kick off next week, Oct. 13, in Lafayette, LA. With 35 No. 1 hits under her belt, the award-winning entertainer will deliver hit after hit during her “entertaining and flawlessly executed” (Pittsburgh Post-Gazette) live show.

Fans can watch Reba as a regular on the third season of the ABC drama Big Sky, airing every Wednesday at 10p ET/9p CT. Reba: The Ultimate Christmas Collection releases October 14 and is available for pre-order now.

Multi-media entertainment mogul Reba McEntire has become a household name through a successful career that spans across music, television, film, theater and retail. The Country Music Hall of Fame and Hollywood Bowl member has won 16 ACM Awards, 15 American Music Awards, 9 People’s Choice Awards, 6 CMA Awards, 3 GRAMMY® Awards, a GMA Dove Award and was a 2018 Kennedy Center Honors recipient, in addition to multiple philanthropic and leadership honors. Reba has celebrated unprecedented success including 35 career No.1 singles and selling over 56 million albums worldwide. Reba recently earned her 60th Top 10 on the Billboard Country Airplay chart, extending her record for the most Top 10 hits among female artists. Reba’s Top 10 success spans across five straight decades and lands her alongside only George Jones, Willie Nelson and Dolly Parton in the achievement. The Oklahoma native and Golden Globe® nominated actress has 11 movie credits to her name, a lead role on Broadway in Irving Berlin’s Annie Get Your Gun and starred in the six-season television sitcom Reba. Her brand partnerships include Dillard’s, REBA by Justin™ and she was named the first female and musician to portray KFC’s iconic founder Colonel Harland Sanders in their celebrity colonel campaign. Reba has joined the ABC drama Big Sky as a regular for its third season. For more information, visit www.Reba.com or follow @Reba on Facebook, Twitter, and Instagram.

Hailing from Medicine Hat, Alberta, Canada, Terri Clark got her start by playing for tips at Tootsie’s Orchid Lounge, a legendary honky-tonk bar across the alley from Nashville’s historic Ryman Auditorium. The 3-time JUNO Award winner holds the honor of being the only Canadian female member of the legendary Grand Ole Opry. Terri has received 19 CCMA Awards and in 2018 was inducted into the Canadian Country Music Hall of Fame. In 2016, Terri took to the airwaves in a whole new way with Country Gold with Terri Clark. The internationally syndicated radio show can be heard on over 170 stations across the USA and Canada and has garnered Terri CMA and ACM nominations for her hosting duties. With over 5 million albums sold, hit singles such as “Better Things To Do,” “Poor Poor Pitiful Me,” “Girls Lie Too,” “Northern Girl,” and “I Just Wanna Be Mad,” a slew of awards and sold out audiences on both sides of the border, Terri has solidified her place in the history books of country music.

19-time Dove Award-winning group The Isaacs, comprised of matriarch Lily and her three children Ben, Sonya and Becky, have spent five decades creating the undeniable family harmonies and distinct sound that have made them a favorite among audiences around the world. The 2021 Gospel Music Hall of Fame inductees continue to build on the legacy first launched by the family back in 1971, with a newfound excitement and never-waning passion for the music they love to make. Known for their ability to bridge and blend genres, the recently inducted Grand Ole Opry members have collaborated with high-profile contemporaries including Dolly Parton, Reba McEntire, Vince Gill, Alison Krauss, Paul Simon and many more to sing on numerous albums and share stages across the country. The masterful vocalists, instrumentalists and songwriters received consecutive Grammy nominations for their last three records. The Isaacs Foundation was started by the family to benefit the less fortunate in America. They have also raised hundreds of thousands of dollars to benefit Israel, specifically Holocaust survivors, orphans and “lone” soldiers. For more information and to connect with The Isaacs, visit Facebook.com/TheIsaacs. 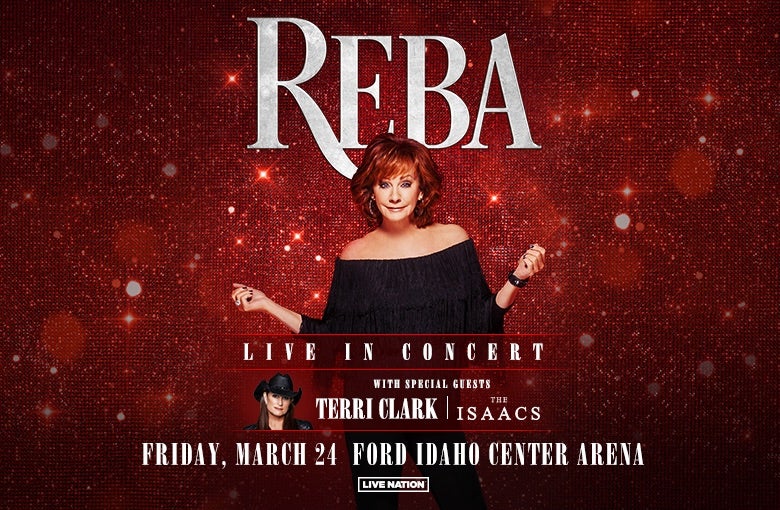 with special guests Terri Clark and The Isaacs