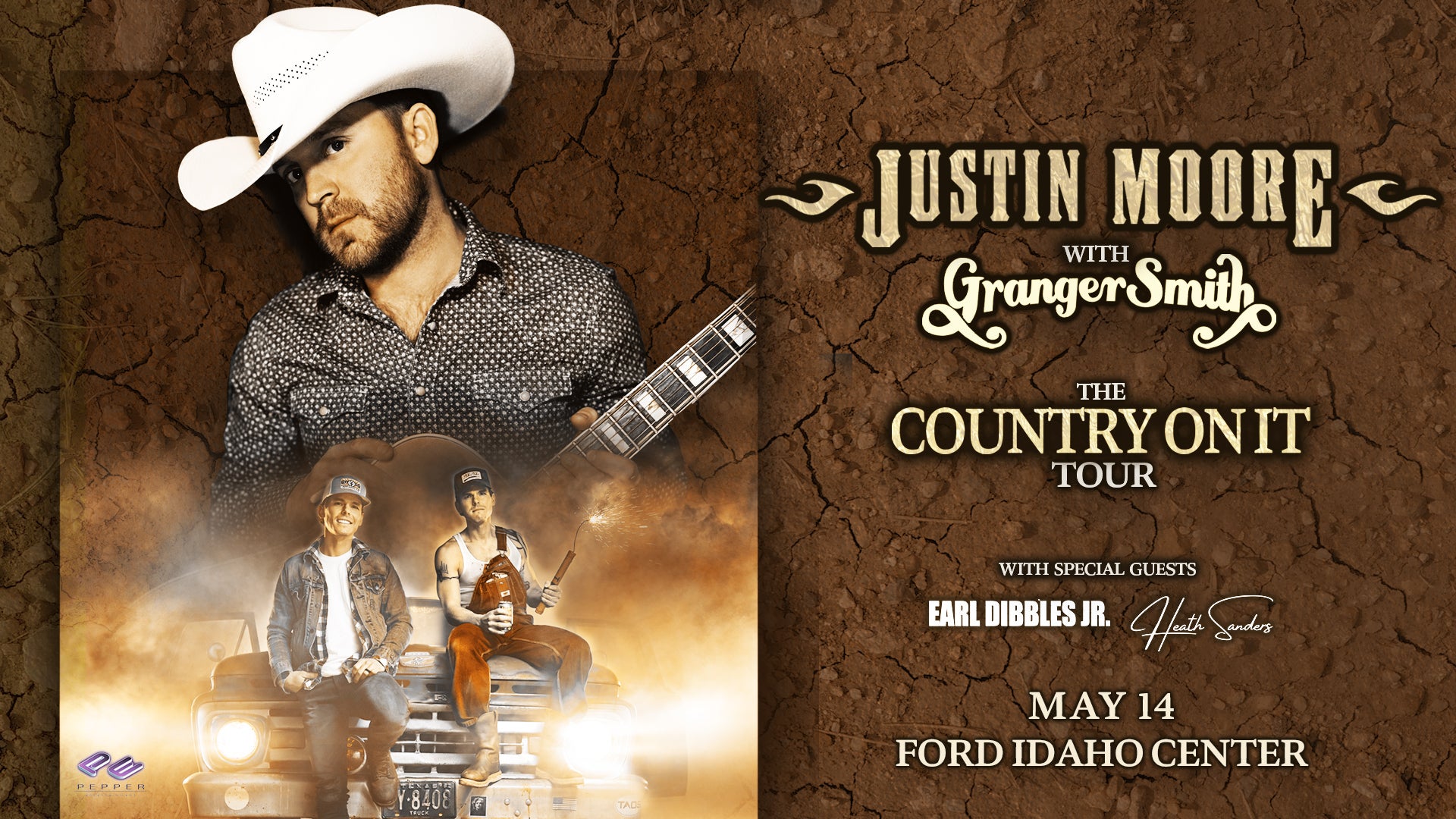 Justin Moore The Country On It Tour

Home / About Us / News / Justin Moore The Country On It Tour

Justin Moore The Country On It Tour

THE COUNTRY ON IT TOUR

Multi-PLATINUM hitmaker Justin Moore has built a loyal following over the past decade with his traditional country sound and captivating live shows. Climbing the country radio charts with his current single, “With a Woman You Love,” the emotional tune follows in the footsteps of his 10th No. 1 hit, “We Didn’t Have Much,” which is featured on his eight-track collection of tunes, ‘Straight Outta The Country’ (The Valory Music Co.). The Arkansas native’s extensive fanbase helped boost his fifth studio album, LATE NIGHTS AND LONGNECKS, to the top of the charts upon its release. Lead track “The Ones That Didn’t Make It Back Home,” and follow up “Why We Drink” both peaked at No. 1 on both Mediabase and Billboard. Moore’s previous project, KINDA DON’T CARE, earned the singer his third consecutive No. 1 album debut and features his chart-topping singles “You Look Like I Need A Drink” and “Somebody Else Will.” It served as a follow up to his second No. 1 album release, the GOLD-certified OFF THE BEATEN PATH. Over his 10+ year career, Moore’s No. 1 hits have also included “Point at You,” “Lettin’ The Night Roll” “If Heaven Wasn’t So Far Away,” “Small Town USA” and “Till My Last Day” as well as seven Top 10 hits and PLATINUM-certified albums JUSTIN MOORE and OUTLAWS LIKE ME. The Valory Music Co. recording artist has earned multiple ACM, ACA and ACC Awards nominations as well as an ACM Award win. He has shared the stage with Hank Williams Jr., Brad Paisley, Miranda Lambert, routinely traversing coast-to-coast on headline runs and will hit the road this spring to headline his ‘Country In It Tour.’ Adding to his already impressive career, Moore has also been busy hosting his Justin Moore Podcast sponsored by Bobcat with tour manager JR and interviewing guests such as Oscar award-winning actor Matthew McConaughey; Country stars Tracy Lawrence, Jon Pardi, Brantley Gilbert; wrestling champion Diamond Dallas Page and ESPN’s Marty Smith. He also recently took on a new role as co-host on 103.7 The Buzz's morning drive-time sports talk show, "Morning Mayhem," where he spends his weekday mornings dishing out his never-ending sports knowledge on-air. For tour dates and more, visit, JustinMooreMusic.com.

Over the course of his groundbreaking career, Granger Smith has amassed a massive and rabid audience now known as "Yee Yee Nation" built through heavy touring and grassroots fan engagement. He now has a social media following exceeding eight and half million along with more than one billion online video views. Signed to BBR Music Group's Wheelhouse Records, Smith broke onto the national scene with Remington, an album that garnered him the No. 1 smash "Backroad Song." Smith was also awarded a BMI Country Award for writing, producing, publishing and performing "Backroad Song" and followed it with the Top Five hit, "If The Boot Fits." “Backroad Song” was one of the Top 10 Most Played Country singles of 2016 according to Mediabase and has been certified RIAA PLATINUM. His album When The Good Guys Win spawned the hit “Happens Like That” that has been certified RIAA GOLD. Not only has Granger stacked major accolades as an artist, but he also released his first-ever book If You’re City, If You’re Country, which immediately hit No. 1 on Amazon best-selling lists. Known as an artist but also for his alter ego, Earl Dibbles Jr., his family’s YouTube series “The Smiths” and his iconic outdoor apparel company, Yee Yee Apparel, Smith is a jack of all trades. Additionally, Granger and his wife Amber Smith started The River Kelly Fund to bring awareness and invest in children in need, arts and education, wildlife preservation, military, veteran and first responder assistance, donor affiliations, and many more organizations in honor of their son River Kelly Smith. Taking all of these experiences and channeling them into good, Smith released his 10th studio album called Country Things, which ultimately showcases the man, the father, the performer and bona fide artist Smith has become. 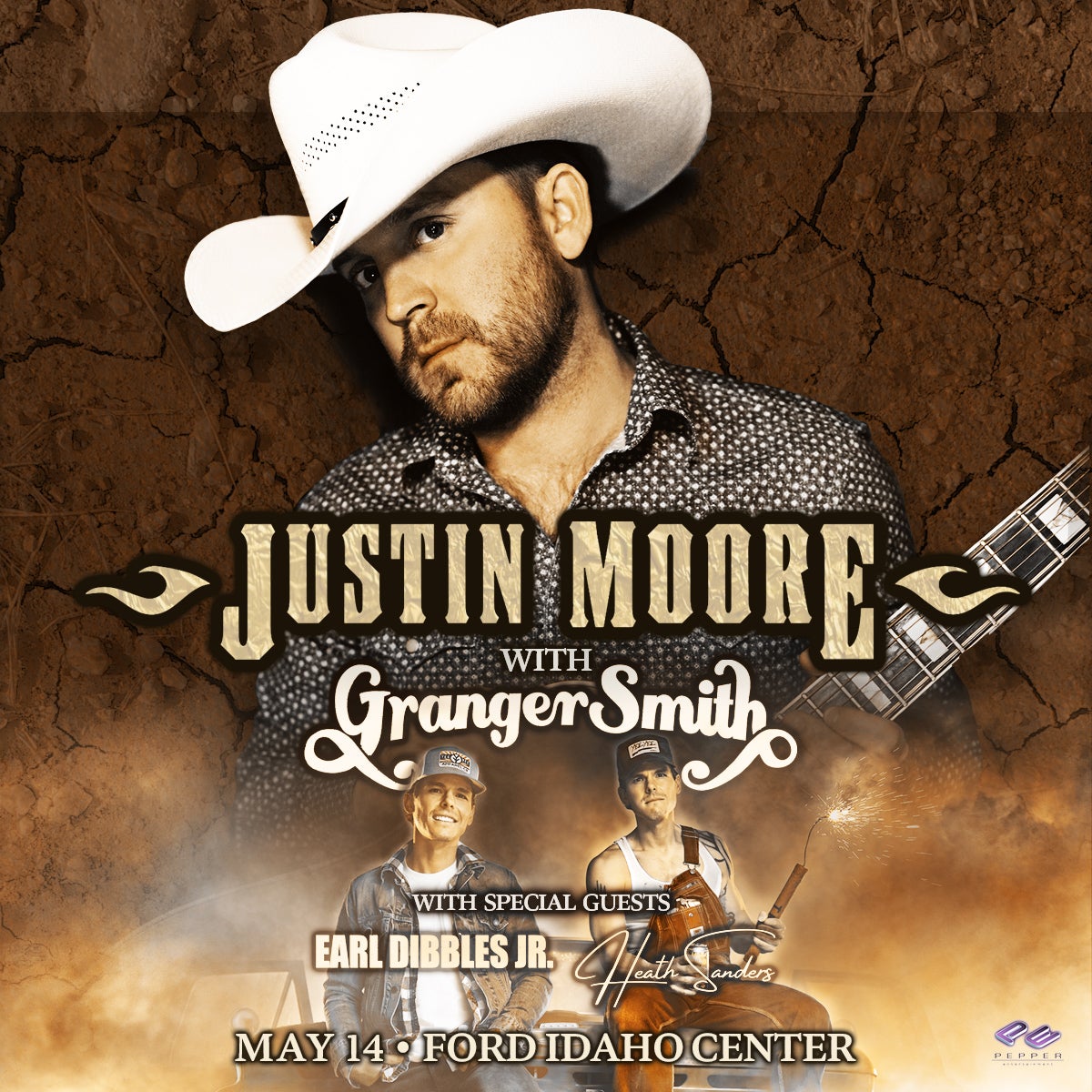 Justin Moore - The Country On It Tour